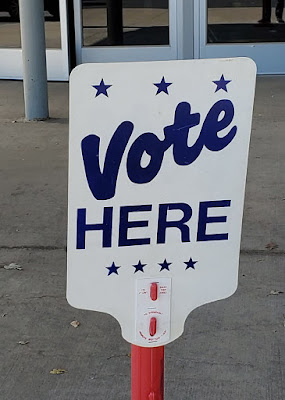 We voted this morning and I am happy to say it went smoothly and easily with no problems or delays.  Even though we live in a small town there are many different places to vote and based on where we live in town we are assigned a particular location.  This time it was one of the town's small churches.  Before we even got to the church we could see the line wrapping part of the way around the block.  We were expecting this and actually I am happy to see so many people getting out to vote.  There is usually a good turnout of voters for Presidential elections but this year I believe is a record breaking year throughout our country.

We parked and walked around the block to the end of the line.  Tom was concerned about how long we might be standing in line but it was moving much faster than we had expected.  We were fortunate to have beautiful weather with the sun shining brightly and before we knew it we had reached the church.  Once inside the whole process went quickly.  All Covid precautions were taken with the use of hand sanitizer, masks and the spacing of people voting.  We signed in, received our ballots and were done quickly despite the fact that we had quite a few local issues on the ballot in addition to the Presidential election.   Including the time we were in line, we completed the entire process in 30 minutes.

So now we have the hard part - the waiting.  It is entirely possible we won't know who won the Presidential election until tomorrow or later.  This is a record breaking year for the number of people voting and that can take time to tabulate.  But I really, really hope we at least have a good idea of who won tonight.  I am also hoping that regardless of who wins there will be no problems as a result of the election.  In most large cities, including Kansas City here, merchants are boarding up windows in anticipation of potential problems.  There have been some rumors of problems if Trump loses.  I hope those are rumors and nothing more.  Our country has gone through so many negative changes in the past four years, it is time for us to heal.