Do You Remember Green Stamps? 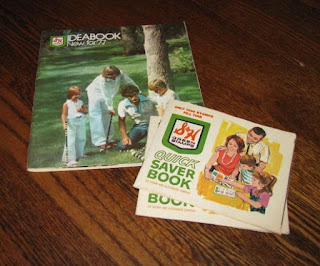 I was sorting through some old boxes the other day and found a relic from the past - Green Stamps.  I had put away a couple of the booklets filled with green stamps, an old catalog and a couple of other trading stamps popular in the 1960s. 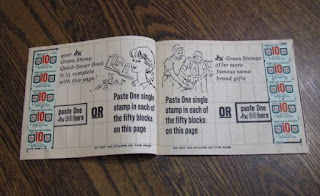 When I was growing up I remember my Mother saving Green Stamps.  You received them at many different stores and gas stations based on how much money you spent.  If you saved these up and stuck them in a book you could redeem them for nice gift items.  My Grandmother used to send her stamps to me so I quickly got in the act of saving and spending them too.  I remember using them to buy birthday and Christmas gifts for my Mother.  One year I got her a beautiful mirrored, perfume vanity tray.  Another time I saved up and bought a ukulele for myself.  We had a catalog and could shop for anything we wanted to buy with our carefully saved up stamps.  When we had enough saved we went to the Green Stamp Store to make the purchase. 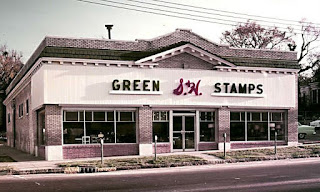 S & H Green Stamps were popular from the 1930s until the late 1980s.  The S & H stood for Sperry & Hutchinson.  You could buy a large variety of items with the stamps ranging from furniture to small appliances and many other household items.  Some things were as inexpensive as one or two books of stamps and others could cost twenty or thirty or more.

I wondered if other countries had used this type of reward program in the stores.  After a little research I discovered there was a British sales program very similar to this using Green Shield Stamps.  Does anyone here remember these stamps or maybe some other similar program that may have been popular? 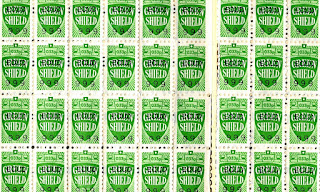 I don't know about you, but things like these stamps really take me back.  Like many other things from the past, these are now just a part of our memory.