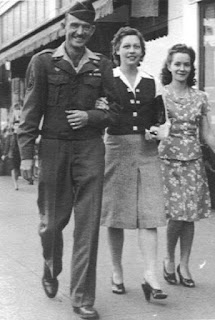 I have many very old family photographs that I am in the process of  sorting and scanning.  Street photography was popular during the 1940's, particularly during WWII.  I have always been fascinated by such pictures for they capture an unexpected moment of everyday life.  This photograph shows my uncle, aunt and my mother.  It was most likely taken in their home town which at the time was Fort Smith, Arkansas.  My uncle was probably home for a short visit before he went overseas. My father had already gone, so my mother was spending time with her brother and his wife.

I have a few other similar photos of family members during that time period.  I love such pictures for the piece of history they capture.  I was curious about the history of this practice and did a little searching on Google.  I found much more than I had anticipated about this style of photography and I learned it has been around almost as long as photography itself.  In fact, it is still a popular style although I was not aware of that.  Some photographers concentrate on architecture while others feature mainly people.  There have been many famous street photographers through the years including Ansel Adams.

I have often wondered if many other people had these types of photographs of their family members?  I assume it popular in countries other than the U.S. in the past?  Is anyone here aware of  current street photographers?  I see photography as a beautiful art form and when it is also used to capture history it becomes even more, for now and the future.